The Knife Edge: One Man, So Many Knives©: Boker’s Pocket Knife

Mickey Yurco is an interesting fellow.  He’s been making knives for a number of years
and has a number of unique concepts.  His
current creation is a fixed blade knife he and Boker Knife call The Pocket
Knife.

The first thing you notice when you open the box is the graceful
saber grind drop point blade tapering to a point.  The egg-shaped handle is depressed by about
26 degrees from the center blade line.
More on that later.  The handle
also sports a cutout that accommodates your index finger.  The egg-shaped handle is constructed of black
G-10 and has a slight palm swell making it easy to grip the knife.  The upshot of this design is a knife that locks
into your hand and the allows your wrist to be at its neutral position where
you have the most strength and control of the knife.

Clearly it was a designed for a purpose.

Let’s look at the specs, shall we?

The knife is made from 440C stainless steel.  The blade is 3.3 inches long with a 0.15 inch
thickness and overall length of 6.8 inches.
The finger groove acts as a stop to keep your hand off the sharp
edge.  The bend also helps to keep the
knife from slipping forward or backward in your hand by converting either
motion to a push into your palm or a press into your closed hand.  A large lanyard hole is available, always a
good idea when working over water or deep snow. 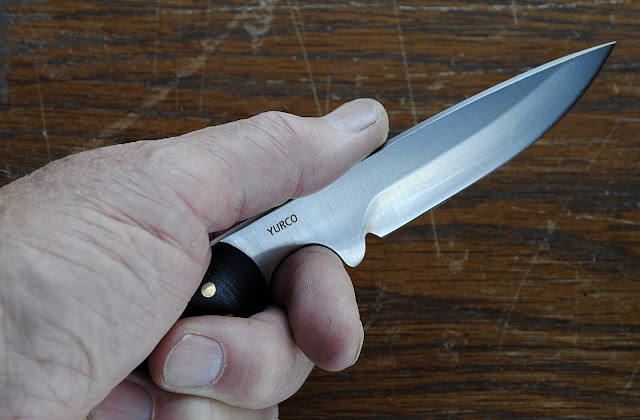 440C isn’t a super steel.
But it is the best of all the 440 steels.  It is also the steel everyone compares their
newest steel to.  Frankly a well-made,
well-tempered knife of 440C will give you all the performance the majority of
us will ever need.

No discussion of steel is complete without a formula sheet:

This formulation provides high strength, moderate corrosion
resistance and good edge retention.  Some
of the chromium and carbon form tiny carbides on the grain boundary.  Iron also can form carbides, but they are not
as effective as chromium carbide.  These
grains are very hard and resist the shear needed to displace the steel
grains.  This is what gives steel its
strength.

The results of this chemistry and heat treatment gives The
Pocket Knife a Rockwell hardness c scale of 57-58. 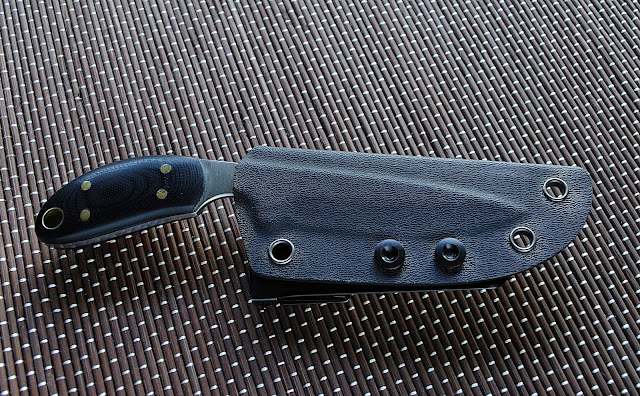 The sheath is made from strong light weight kydex

The sheath is fabricated out of kydex and sports what I
think is a unique attachment device, the Ulticlip.  This clip allows you to fasten a variety of
holsters and sheaths to pants without a belt.
The sheath slips into your pocket and locks on to the edge and provides
a secure platform to draw the knife.  The
knife sheath is designed so you can set it up for left or right pocket
carry.  Mine arrived set up for left
side.  I may leave it that way. 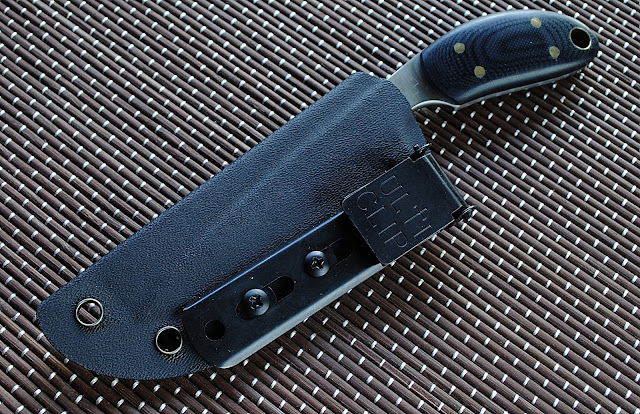 The way back story.

Mickey has been seriously studying martial arts since the
early 70s.  By 2000 he became interested
in knife combatives as taught in Martial Blade Concepts.  Despite being in law enforcement, Mickey
realized that even with CCW not everyone can carry a firearm, but most of us
can carry a knife.  Mike Janich has
developed an evolving concept of using a small legal knife for
self-defense.  These concepts were
attractive to Mickey and evolved into “The Pocket Knife.”  I’ll let Mickey tell you about it.

The wrist is in the neutral position and aligned with the long bones of the arm for maximum strength.

“It was designed to be carried to
the far right (just like my politics) of the front right pocket.  A fixed blade can be drawn and deployed
faster than a folding knife.  Picture a
normal stance with your thumbs in your pockets.
Your hand is now on the knife handle.
It is an inconspicuous way to quickly unsheath the knife. The small egg
shaped handle fills the air pocket in the palm allowing a good grip.  The small handle also stays out of the way
when not in use. This little blade is also a great shape for everyday mundane
tasks from opening mail to cutting a steak at the Outback.  An email I received from Boker stated that it
was a popular knife at a German Knife show.
I am pleased with their interpretation of my knife.”

I thought the knife needed to be a
little lower in my pocket, so I moved the clip up one notch.  I like it lower in the pocket.  Yes, I will probably scratch the G-10 handle,
but as I see it as a tool, I’m okay with that. 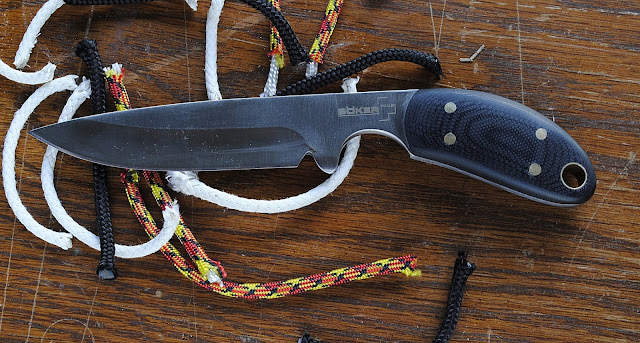 Sharp out of the box

I also did a little cutting with
mine.  Cut a little rope, reduced
cardboard to smaller pieces shaved a little wood.  I think it would make a great pork chop
knife.  I’d take it for a walk off the
concrete, for weekend at a cabin, or just simply heading out.

I think it’s a pretty cool knife.  Spend 5 minutes with Mickey and you’ll see
how dangerous a knife can be in trained hand.
But even I know, that going up against someone with a couple inches of
sharpened steel in their hand makes most people think twice.

You can also find the Ulticlip to modify your current
holsters, sheaths and whatnots at: https://www.ulticlip.com/?v=7516fd43adaa

Source
The Knife Edge: One Man, So Many Knives©: Boker’s Pocket Knife is written by knife for knifesearch.blogspot.com

The Knife Edge: One Man, So Many Knives©: Finnish Chili