The Knife Edge: One Man, So Many Knives©: Doctor, Doctor

I
seldom buy slip joint knives.  They seem
so old fashioned, as if the manufacturer can’t catch-up with the 1980s not to
mention 2021.  The blade is held open by
spring pressure on the tang and doesn’t lock the blade open.  I see it as a safety issue, but that’s me.  I do make an exception for very cool knives,
like Doctor knives or Physician’s knives.

But
I’ve got a list of must-haves.  It’s got
to have a spatula and a slender spear point.
The knife butt should be flat and I suspect the originals has a solid,
flat end.  Back in the old days when
doctors made house calls they often took medical supplies with them.  Sometimes they needed to formulate medication
and would grind up a power or pill and makes a salve or roll pills.

You
don’t find too many as this was a niche market, but I’ve seem examples from ink
and paint companies as part of their advertising and self-promotion.

I’m
also not a big Case knife fan.  They are,
in my opinion, a collector’s club attempting to drive sales by constantly
changing handle materials and their unique system of dating blades.  If you collect a specific pattern, you’ll never
be done as each year a newly dated knife is made by the thousands.

One
of their ploys, which I like from a marketing point of view, is they will
“retire into the vault” a pattern that doesn’t have much demand and later
release it when they think there is demand for it.

This
happens to Doctor knives.  I saw this
knife in 2018 for the first time, but even as I jumped on it, it slipped
away.  A. G. Russell had “found’ a cache
and I didn’t wait.

The
handle is natural bone scales that have been sculpted and dyed with the stars
and stripes of the American flag waving in the wind and capped with
nickel-silver bolsters.  The fact that
Case jigs and dyes their own bone in house allows them to create these unique
pieces.

My
knife is part of the Star Spangled series Case introduced at the 2017 SHOT Show.  The blade is a slender spear point 3 inches
long with a Rockwell C hardness of 54-57.
The blade is made of Case’s proprietary steel called
Tru-Sharp.  Case describes as a high
carbon steel.  I suggest a drop of oil is
called for.

The front is a nice jigged bone
handle in a American Flag motif while the back is just white bone.

The one thing I don’t like, half
the width of the spatula seems to be scratched by the brass bolster that separates
the two blades.  I doubt very much the
brass actually did scratch the blade.  I
think it is a manufacturing artifact.  I
could polish it out, if it’s not too deep, but I’m going to leave it as that’s
the way they made it. 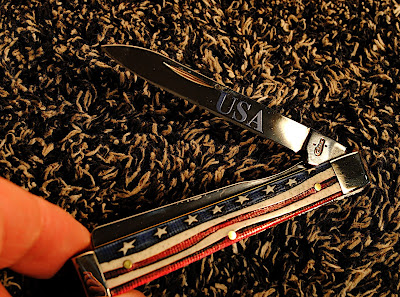 I understand A.G. is out of stock
and the vault is still locked.  I’m happy
to have it in my collection.

Source
The Knife Edge: One Man, So Many Knives©: Doctor, Doctor is written by knife for knifesearch.blogspot.com

The Knife Edge: One Man, So Many Knives©: Treasures in the Drawer

How to Make Mead | DIY Mead In 6 Easy Steps