The Knife Edge: One Man, So Many Knives©: Roper Trapper

The Knife Edge: One Man, So Many Knives©: Roper Trapper 

One classic pocket knife pattern
is the trapper.  This pattern seemed to
have originated in northeastern U.S. in the early 20th Century.  Almost all manufacturers of slip joint knives
have or are making a trapper-style knife.
Most have two blades, but a few rare ones have three.
Trappers traditionally have two
blades hinged on the same side.  The
blades, of almost equal length, are clip and spey pattern blades.  The blades were designed for specific needs.
“…I want to comment on the
trapper name. Whether the pattern was created for the purpose the name implies
is unclear. Whatever the case, I can testify that the size and patterns of the
blades make trappers well suited for dressing and skinning small animals.”  Gary Zinn
While most of us don’t need those
functions on a daily basis, the trapper has a long following of fans and
collectors.
Roper Knives is one of several
brands owned by the American Buffalo Knife and Tool Company out of Sweetwater,
TN.  My eye first caught the Laredo Stag
Trapper in an A.G. Russell catalog.  The
wood and stag handle just spoke to me as did the shield inserted in the
stag. 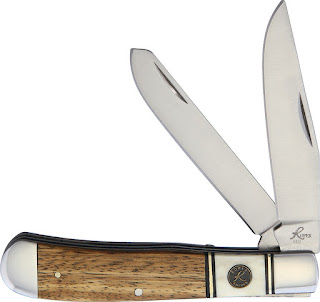 The clip and spey blades are 3.25
inches long and made from 1065 carbon steel.
While hardness isn’t mentioned, I suspect they have an RHc of around 56
to 58.  Don’t let that discourage
you.  This is sufficient for almost all
your cutting chores.  Just remember what
noted knife guy Ernie Emerson says, if I can paraphrase him: softer blades are flexible
compared to hard blades and a bent blade is still a knife but a broken blade is
just junk.
I’ve read of people ‘patina-ing’
their blades with ketchup or stabbing the blade deep into an acid fruit to
produce a lovely patina of gray, but I prefer the bright shiny blade myself. A
little food safe oil and these blades will stay nice and shiny for years. 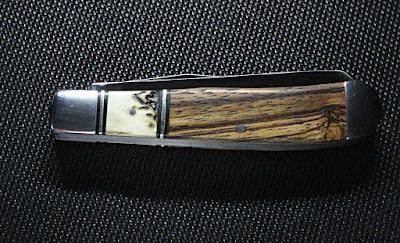 While I find the two-blade pattern
interesting, especially the spey blade, I only wish they were locking.  Yes, I know that would complicate the knife
and increase the cost, but I have a fundamental distrust of slip-joint folders.
You can find your Roper Laredo
Stag Trapper at https://abktinc.com/.  After all, there is a little cowboy in all of
us!  Whoopee-Ti-Yi-Yo!

Source
The Knife Edge: One Man, So Many Knives©: Roper Trapper is written by knife for knifesearch.blogspot.com