The Knife Edge: One Man, So Many Knives©: Wood Duck

The Knife Edge: One Man, So Many Knives©: Wood Duck 

I’ve always admired wood ducks.   According to the ODNR they are sexual rabbits
having two broods a year as compared to the rest of the waterfowl
slackers.  That’s not why I like them.  They seem just too icey to me.
My friend Leonard had a wood duck decoy with a ‘collectable’
knife inside.  After I moaned and
kvetched enough he sold it to me just to get rid of me. Thank you, Leonard!  Every day I look at that duck and it makes me
smile! 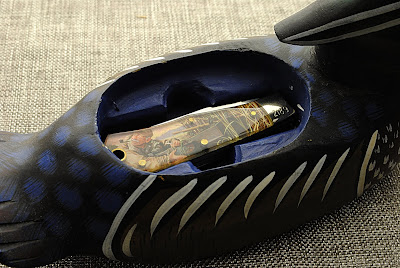 Inside is a United Cutlery 1993 Wildlife Series
Limited Edition Trapper.  Limited to 7500,
that is.  Mine is 2189.  It has the two typical blades found in a
trapper, a spey and a drop point.  Under
the clear plastic handles is a copy of original art by Larry Duke.
The knife, to my surprise was made in the USA.  Most of the UC knives are made somewhere
else.  Frankly, I don’t consider then to
be very high quality. 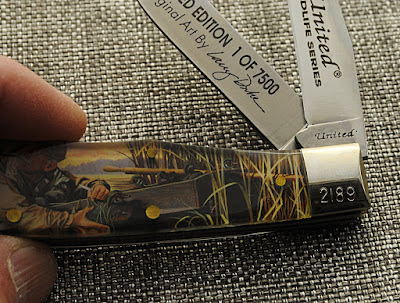 There’s another on the market today, but the wood
duck isn’t nearly as nice.  The
knife?  Well, let us just draw a
charitable vale of silence over it.
I have a little insight for you, but you know this
stuff,
One:  There
is no regulating body, any police or force of law that prevents a manufacturer
from producing a second limited production run of the same product.
Two:  Mass
produced limited editions seldom have real value and market growth potential.
Having said that, I’m really glad to have my wood
duck!

Source
The Knife Edge: One Man, So Many Knives©: Wood Duck is written by knife for knifesearch.blogspot.com

The Knife Edge: One Man, So Many Knives©: Getting Steely